Updated: 1/20/2020 Every year 1Dental offers a scholarship to high school seniors and current college students. This year, we asked all applicants to complete a survey. You may have read… 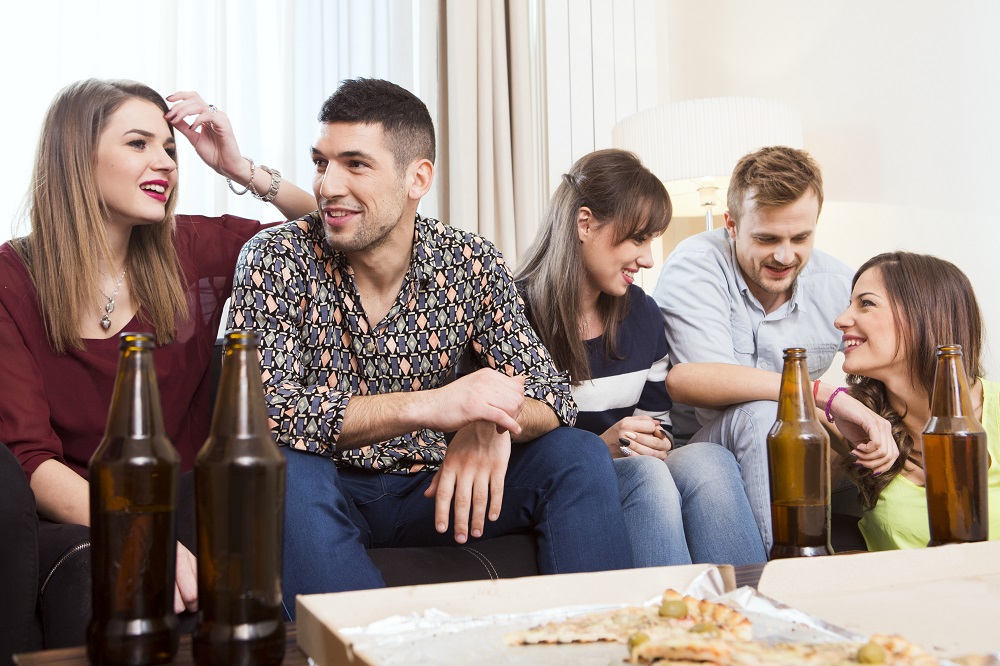 Every year 1Dental offers a scholarship to high school seniors and current college students. This year, we asked all applicants to complete a survey. You may have read our earlier article, “What Your College Student has to Say about Smoking and Their Dental Health.” Out of 3,681 participants, 317 responded that they drink regularly. This article reviews the information we gathered from those 317 students about their habits and opinions on drinking.

What Age Do Most Students Start Drinking?

The majority of our survey respondents who said they regularly consume alcohol said that they began drinking between the ages of 19 and 21. A quarter of regular drinkers said they began between 16 and 18 years old. Most students begin drinking about the time they go to college (and are of a legal age) but many of them begin earlier than college. 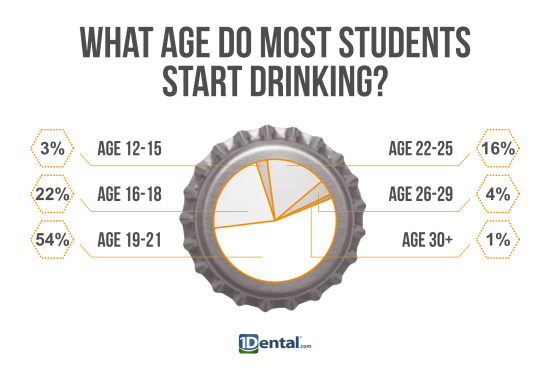 Why Do Students Start Drinking? 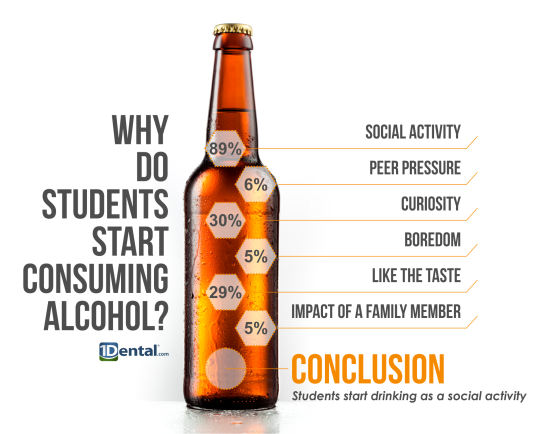 Alcohol bans and restrictions vary depending on the college campus. However, it’s common among campuses to prohibit underage drinking as well as promote safe, responsible drinking to their students. Many campuses offer alcohol education to freshmen as they’re beginning their college career. Some campuses do prohibit alcohol altogether but studies have shown that just as many students binge drink on these campuses than on others. College campuses have tried to prohibit binge drinking and alcohol abuse but local bars are perfectly happy to serve 10 drinks to each student.

College peers seem to play a major role in why students start drinking. Most people begin drinking when they enter college as a social activity, whether they are of legal age or not. Though you’ll see later in the post that most survey respondents do not drink irresponsibly, they do begin drinking to fit in with their friends.

What Are Common Drinking Habits of College Students? 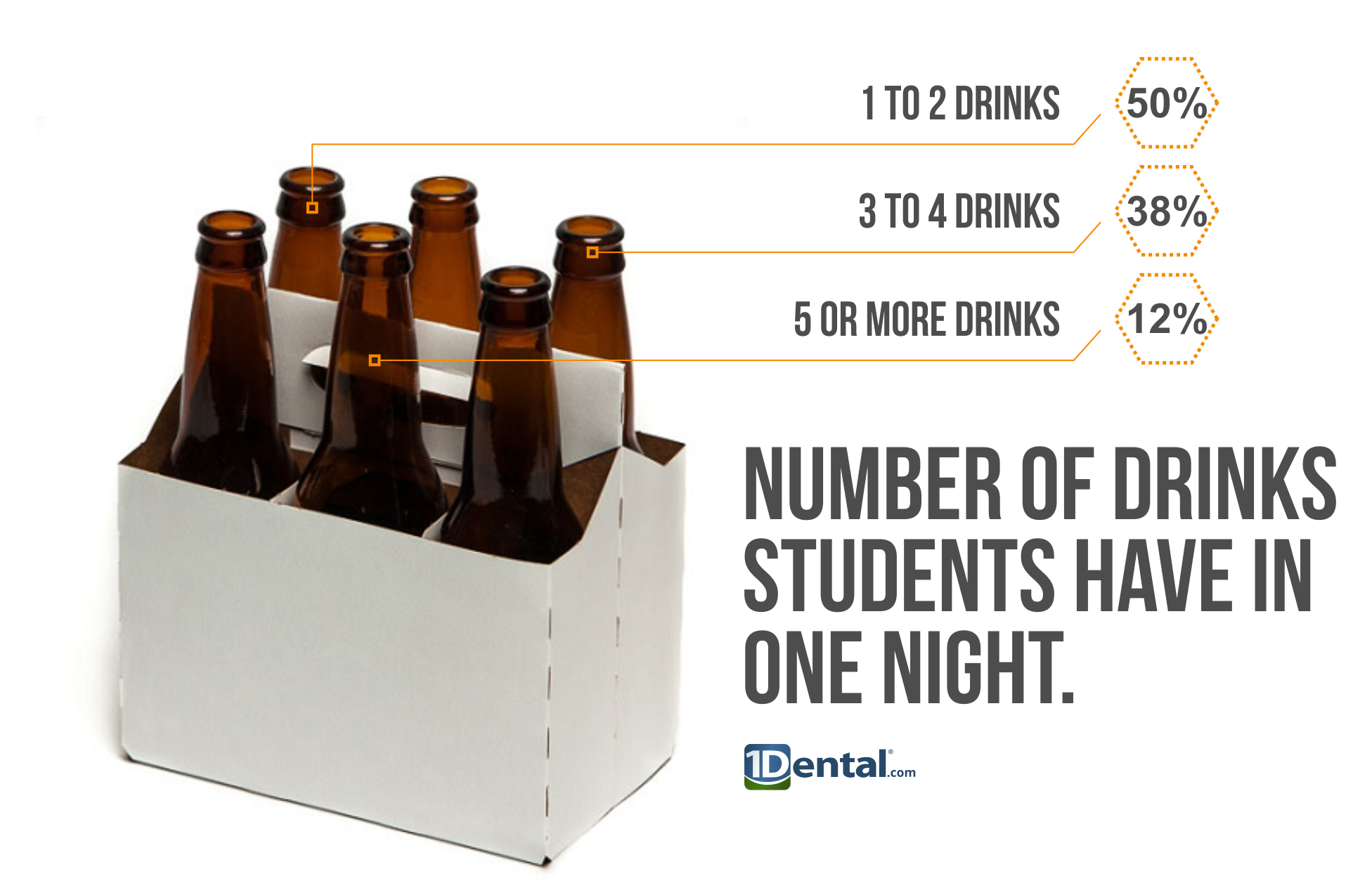 We also asked the students which drinks they like: wine, beer, hard liquor or mixed drinks. Overall, beer was the preferred drink of survey responders but we broke down the data further. Women mostly said they like wine and men mostly like beer. Of the 50% of responders who said they have 1 to 2 drinks in one night, most of them said they prefer wine. Hard liquor was the least preferred drink over all, but it was mostly preferred by students who drink 3 to 4 drinks in one sitting. 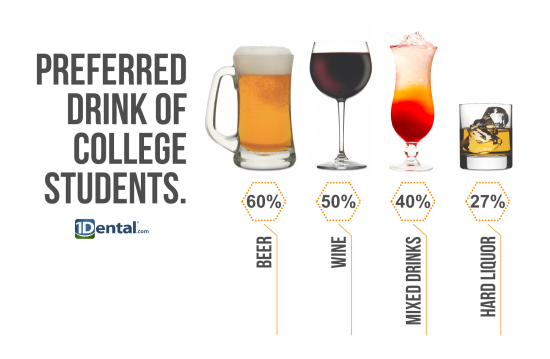 *survey participants could choose more than one answer

What Effect Does Alcohol Have on Health?

Alcohol can affect overall health in positive ways when consumed in moderation and very negative ways when abused.  Most medical professionals define “moderation” as 1 drink a day for women and 1 to 2 drinks a day for men. Alcohol, especially wine, can lower your chances of heart disease. Red wine also has heart healthy antioxidants.

However, too much alcohol over time can have very negative health effects. Of course we know that drinking can cause anemia, cancer, cardiovascular disease and pancreatitis, but it can also cause a lot of oral health issues.

What Are the Correlations Between Drinking and Dental Health?

Studies have shown that excessive drinking does negatively affect dental health. We asked the survey respondents if they thought drinking affected dental health and 71% of them said yes. Fortunately, 62% of students do visit a dentist twice a year. They also did not report large amounts of cavities, but they’re still young and alcohol usually has negative effects over long periods of time.

Over time alcohol increases tooth decay and staining as well as irritation in the tongue, gums, and oral tissue. Alcohol also has a drying effect on the mouth, creating a host for bacteria. Alcohol can prevent healing after dental surgery. So if you have to have dental surgery because of alcohol affects, the mouth may still not heal because of the alcohol. Many recovering alcoholics have reported major dental problems they wish they would have avoided.

Overall, alcohol isn’t great for teeth but some beverages can be more harmful than others. Mixed drinks contain a lot of sugar and acid, which are very bad for oral health. Drinking these beverages regularly can seriously erode enamel and stain teeth. Wine has less sugar but is still very acidic. Red wine contains lots of pigment and will stain teeth. White wine, on the other hand, has no pigment but unfortunately can still lead to staining. The acidity in white wine softens and erodes enamel making it easier for other foods and drinks to stain teeth. And then there’s beer–the most popular alcoholic beverage among our survey respondents. Beer has all the same effects as mixed drinks and wine, it’s acidic and erodes enamel and stains teeth. However, according to Dr. Banker a light, low-carb beer is actually the least likely of all alcoholic beverages to cause tooth decay because it has the lowest acid level and contains the most water.

Peer groups have a huge influence on whether or not college students drink. Like we saw before, most students begin drinking in college as a social activity. Though most of them have fairly safe drinking habits right now, excessive alcohol consumption over time can lead to poor oral health. Here’s a review of the major statistics covered in this article:

We hope this post has been helpful. If you haven’t already, check out our previous post, “What Your College Student has to Say about Smoking and Their Dental Health,” and subscribe to our blog so you don’t miss any of our updates!