Updated: 1/21/2020 For individuals and families across the U.S. wealth spectrum, it can be easily assumed that those with more money are less likely to delay medical and dental care… 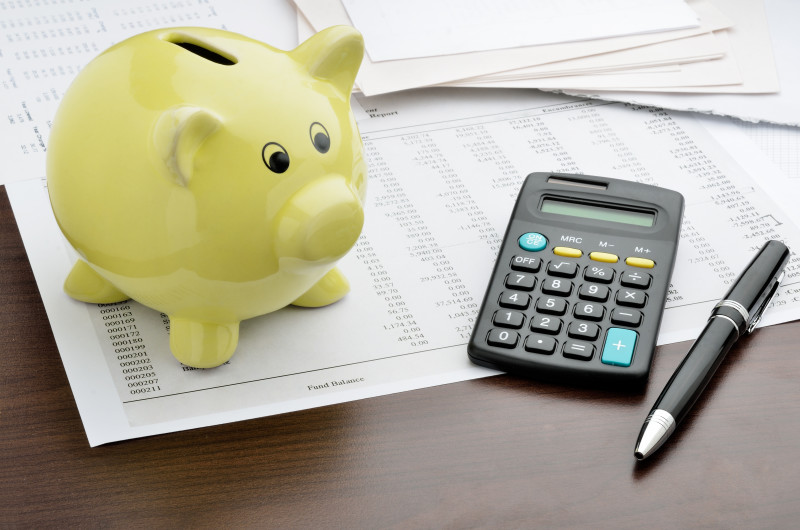 For individuals and families across the U.S. wealth spectrum, it can be easily assumed that those with more money are less likely to delay medical and dental care due to the cost. But for those near or below the poverty line, how does overwhelming price affect the delay of care?

We decided to jump into data provided by the Centers for Disease Control and Prevention to find out, comparing the delay and nonreceipt of needed medical care and dental care due to cost by income level. 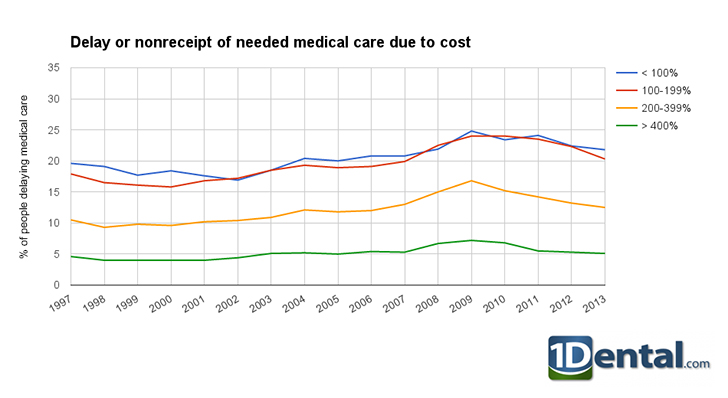 The graph above shows the percentage of adults aged 18-64 between 1997 and 2013 who either delayed or did not receive needed medical care due to cost, based on income level.

This data tells us that no matter the income level, each group saw an increase in how many people chose to delay or skip medical care due to cost between the years 1997 and 2013, but how each also saw a delay percentage return to roughly the same level as 1997:

Collectively, each group’s delay % inflates during the recession (2007 – 2009) while it returns roughly to 1997 levels by the year 2013. However, those who were at or below the poverty level or made 100 – 199% of the poverty level took longer to recover than those who had higher income. 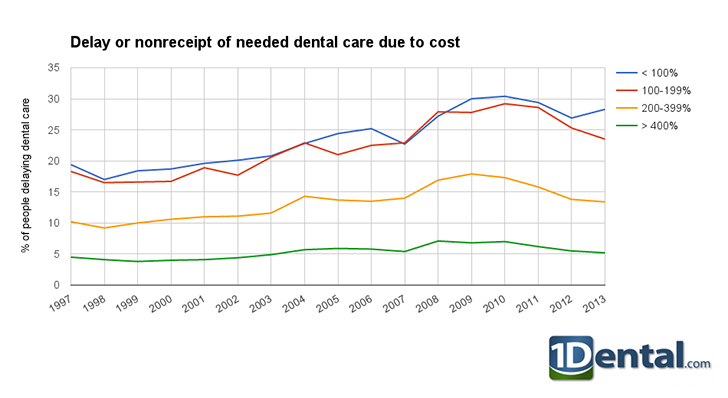 Similar to the medical graph previously discussed, this graph shows the percentage of adults aged 18-64 between 1997 and 2013 who either delayed or did not receive needed dental care due to cost, based on their income level.

Comparing these two more carefully, we see that the wealthier groups seem to keep dental care as a similar priority to medical care. With the less wealthy groups, that is not the case.

In fact, for the <100% group, 2013 actually saw a decrease in medical delays but an increase in dental delays.

So what does all of this mean?

Individuals near or below the poverty level seem to have not yet recovered (in terms of dental care delays) from the recession.

While money is tight and it can be hard to afford both needed treatments, foregoing dental care can only worsen a person’s health. Looking into alternative options to afford both dental and medical care should be approached before delaying either option.

Alternative Options to Afford Dental Care Instead of Delaying It

When it comes to dental care, there are many options individuals and families can choose so they can afford the care they need:

Option 1: Purchase a discount dental plan. 1Dental.com provides this lower cost alternative to dental insurance for those that cannot afford dental insurance, such as indicated in this data for individuals near or below the poverty level. Dental plans can make treatments more affordable and improve the health of this particular population segment.

Option 2: Work with the dentist on a payment plan. Dental treatments don’t have to be paid in full. Many dental offices work with their patients to provide them with an affordable payment option, while also getting the care needed.

Option 3: Like a payment plan, dentists can create a treatment schedule for patients. These schedules help prioritize the most critical dental treatment first, working down from there.